Well, both of us actually want A/C in the car if given a choice, but we learned an expensive lesson by assuming we couldn’t live without it for a few days in the Guatemalan highlands.

As we mentioned, the A/C had been giving us trouble starting on the rough road towards Lanquín.  As we left the El Retiro Hostel, feeling very smug about getting our flat tire fixed, we also high-fived about the A/C seemingly operating again – though we did detect a rattle off and on that didn’t give us extreme confidence.

The drive to Cobán from Lanquín was blissfully short, and we arrived early to the Hotel Don Juan Matalbatz, where we enjoyed parking in the courtyard and a very friendly reception including some kind of strawberry juice.  Don Juan Matalbatz’s location was, for a change, quite accurately represented on Google maps, and as we confidently drove through half of a market street to get there, we were glad that we hadn’t gone wrong.

The staff of the hotel were wonderful (as, to be demonstrated later, were the owners), and Melanie repaid their kindness with translation and English pronunciation assistance – watching a German teach a Guatemalan how to say “thousand” properly really warmed my international heart.  (Good thing Melanie spent all those years in the UK learning how to say “th”!)

A brief walk around in the evening led us to this monument to when the space aliens landed in Cobán – it’s surprising how much their leader looks human – and to some Guatemalan style “tacos”.  I put these in quotation marks because really what you’re served is a pile of delicious grilled meat, some cole slaw, hot sauce, and tortillas – and you need to put this together yourself whilst sitting on the square.  Seems inefficient, but judging by the lines at the many identical stands, very popular.  One serving cost about US$1.  Oh, and Guatemalans don’t use tortilla presses – so the tortillas are smaller, but thicker, and invariably hand-patted. 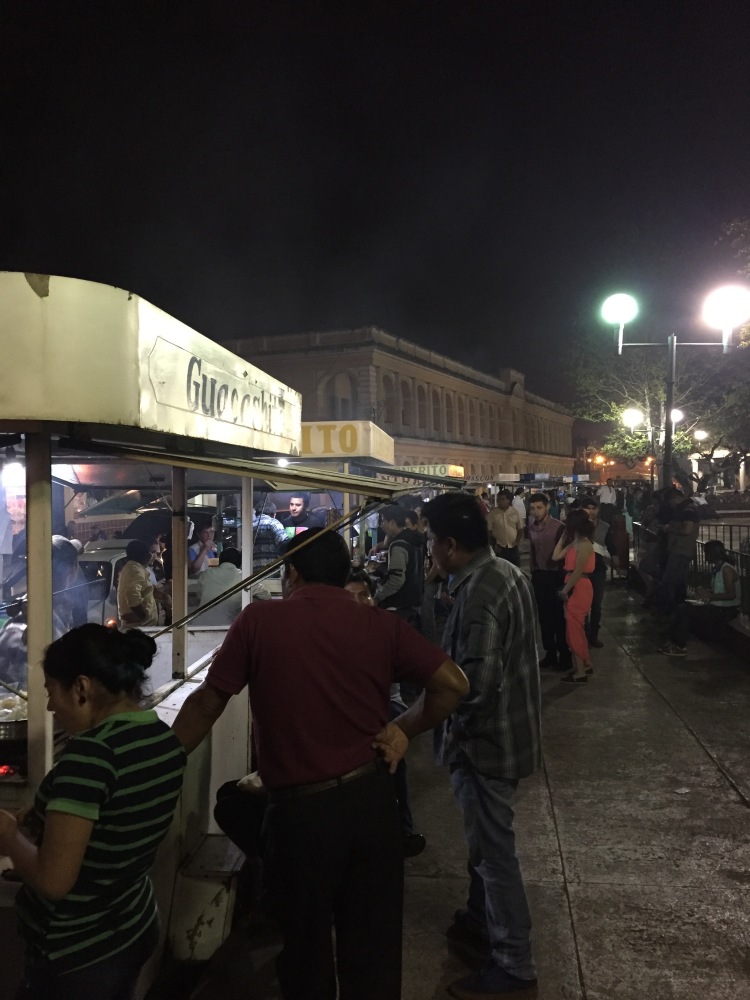 The next day was a Sunday, and we were determined to be slightly more active than the day before.  I do say slightly, because while we took a tour of a coffee plantation and had a great dinner, we still managed to catch most of the day’s four NBA playoff games (League Pass and American time zones FTW!).  Cobán’s highland areas are amongst the best coffee-growing regions of Guatemala.  Since we had not gotten to tour a coffee plantation whilst in Laos, we were happy to be able to do so here, just outside of town at a local cooperative.

The tour was basic but informative, and it was a nice walk around the grounds and through their cultivated pine forest.  Personally, I had no idea that coffee fruit tasted a bit peppery, and I was feverishly trying to figure out how to start an adjacent business selling that byproduct as jam to mustachioed hipsters in Billyburg.  It was also amazing to note how differently the different members of the cooperative kept their individual allotments of land – some clearly tended a lot more than others, despite a lack of attention to e.g replanting new plants every decade or so leading to lower production.  (Collective agriculture…always such a great idea, then everyone starves.)

Dinner was at a place called “Kardamomuss” – most dishes and drinks involved cardamom flavor, and while we were the only customers present, the service and food were both high quality.  Guatemala is the world’s largest producer of cardamom, a fact which surprised both of us given that we don’t associate their food with that flavor.  (Most of it, or at least what was left after we ate a metric ton of cardamom at Kardamomuss, seems to be exported.)

Later, upon asking a local how there could be more than a few classy restaurants with no patrons, we were reminded exactly who pays the bills in Central America, and what an empty restaurant is actually quite good for.  (Reminded me of Rice To Riches and half a dozen other places I used to go to in NYC.)

Monday rolled around, and that was the day we’d tabbed to get the A/C fixed.  Very fortunately, on Sunday I had run into one of the owners of Don Juan Matalbatz, Patrizia.  She had offered to ask her husband where we could go to fix that item – at the time, we were not sure whether a simple coolant recharge would be enough, or whether more invasive surgery was needed, and since coolant recharging is a relatively specialist activity, we were grateful for the help.  A knock on our door late on Sunday had upgraded the “I’ll ask him where you should go” to “he will take you,” which was to be even more generous an offer than we then realized.

We met Rafael at 10am on Monday and followed him to the A/C shop.  I don’t think there was a single surface of that store that wasn’t covered in grease, including the two guys that worked there, but they seemed to have a grip on at least disassembling A/C systems.  Since Toyota is by far the most popular car brand in Guatemala, we were confident that they’d at least diagnose the issue correctly.  We also spotted that they had a recharge tank, not just for R134a (our coolant, the more modern), but the illegal-in-the-developed-world, ozone-killing R12.  (One of the several reasons to buy a late 1993-onwards Land Cruiser, rather than prior, is that the older trucks have R12 systems.)

We popped the hood for the guy and he showed us that the A/C compressor was off balance and rattling, which matched the noise we were hearing in the passenger compartment, and was at least partially a result of the rough road.  We then waited for the owner to show up – while we were doing so, I got a haircut at the barber next door.  One of the best haircuts I’ve ever had, all for about US$3.

By the time I was done, the owner had showed up, and we were already approximately US$60 into a potential repair.  The owner, who looked somewhere in between Fester Shinetop and Mr. Clean’s illegitimate brother Mr. Dirty, was no good samaritan.  But with Rafael there we knew we had the best possible chance of getting the problem solved.

Rafael, bless his heart, then went above and beyond the call of duty.  Instead of dropping us back at the hotel, he took us on a tour of Cobán’s surroundings, including the local shopping mall for a coffee, a nearby river-fed swimming pool (closed for a much-needed de-mossing), and eventually to the market in nearby San Pedro Carchá for a meal.

Rafael would have been a natural food blogger – he half remembered eating some great spicy pork in the market there in years past, and managed to navigate us to a place that wasn’t yet open, yet had a queue building outside.  (This despite the fact that it was 1:30pm, and that each and every nearby stall was a ghost town).

No joke, that might end up being the best meal we eat in all of our time in Guatemala.  Once Miss Anita showed at about 2pm, we were eating some absolutely fantastic smoked pork loin smothered in chili sauce, some mayonnaise-laden but fresh veggie salad, and rice.

I’d tell you how much it cost, but Rafael had beat us to the check by prepaying – extraordinarily generous, considering he was already playing tour guide, negotiator and translator.  He even helped us clean the bugs and dirt out of our A/C condenser!  A true friend.

Which brings us back to Fester Shinetop.  We had already stopped back in once between visiting the mall and going to the pool and lunch, and he showed us what he thought the problem was – instead of being a bearing, he thought it was more likely to be damage to the electrical coil inside the compressor.  Rafael shook his head – he believed, correctly as it turned out, that the damage to the coil was downstream of the actual problem, that the bearings of the motor were worn.

The guy was quite insistent, so we relented slightly, and then the bidding began.  From an initial quote of over US$300, Rafael negotiated the repair down to about US$250 – a fantastic job.  I wish I had done a better job myself – we were telling ourselves it was a matter of price, and while this was expensive (indeed, a brand new compressor would cost about $250 in the US), at least the problem would be solved.  Turns out not so much – the repaired A/C compressor seized the very next day, less than four hours of use later, and we have no idea if we’re going to get any of our money back (if we do, it will be because of Rafael, of course).

Note to ourselves: running for a while without A/C is better than throwing away US$250, and you always have a choice.  Live and learn!

Next time: the exciting story of Guatemala City and Atitlan.